Defend Your Faith With TLC

Was your journey to faith marked by skepticism? Lots of questions and doubts blocked your way to the truth of Jesus Christ and Him crucified? And was there someone God used to walk you through some of those questions and doubts? Maybe they did not even answer your questions, but managed to point you to what your real question was that had you “kicking against the goads” in the manner of Saul of Tarsus. My experience was one of quite childlike faith, that even though a student of the sciences in a time when naturalism and evolution had become mainstream, I did not question the existence of God. Interestingly, this very thing that seemed to clear the way towards my faith in Christ as God in human form come to save lost sinners, is the very thing that has made it difficult for me to defend my faith and the existence of God to others. Evangelism to me was restricted to a gospel presentation using bible verses, which are certainly necessary in most cases for true understanding and faith in Christ, but leave a prominent gap in reaching people skeptical of things such as the reliability and authority of Scripture as the word of God, let alone the existence of God in the first place. In recent years, I have made more concerted efforts at obeying the call of 1 Peter 3:15 to “always be prepared to give the reason for the hope that you have”, including being prepared to speak with skeptics of belief in God and the Christian faith.

Always be prepared to give an answer to everyone who asks you to give the reason for the hope that you have. But do this with all gentleness and respect. 1 Peter 3:15

A tool I would like to introduce here is something I developed after recently learning of a framework for engagement of people on matters where opinions might differ. This tool is called the Triple Layer Cake and as the name implies, this tool involves learning about 3 layers and of course, the icing on the cake. Our 3 cake layers include engaging people on the following levels:

Put differently, these layers can be described as follows:

If I stack 3 layers of cake on top of one another by themselves, there is not a whole lot of appeal to that image—but if I put icing between each layer, and then cover the 3-layer stack with icing, now I have something I can sink my teeth into. Noted Evangelist/Apologist Michael Ramsden calls this fourth vital part of the cake

Various beliefs and belief systems can be broken down into Theory and/or Thoughts, Feeling and/or Experience, and Doing or Dogma. For example, a physician will have studied certain theories (e.g. germ theory of disease), had certain experiences (e.g. cared for a patient with bacterial sepsis), and done certain things in the practice of their profession (e.g. prescribe Antibiotics for a Staph infection). The same could be said for someone of a specific religious faith. A Muslim will think certain thoughts (e.g. infidel theory), have certain experiences (e.g. Haj, Mecca), and do certain things (e.g. Ramadan fasting). However, when it comes to the Christian, applying the 3 layers of engagement just does not satisfy what it truly means to be a Christian. I may have Christian thoughts (e.g. God created the world), experiences (e.g. Baptism), and dogma (e.g. Thou shalt not steal), but the profound uniqueness of Christianity comes from the icing on the cake, Being. And that Being clearly relates to the very person Jesus Christ. Christianity without God/Christ is nothing more than “morally structured” humanism and is illogical according to true settled atheist standards. So how do we investigate (taste?) this “icing on the cake”?

Was Jesus Christ a legitimate person in history?

Even the most liberal of religious academics would have to admit to this historical truth.

Once again, the biblical AND extrabiblical evidences make it a significant leap of faith to deny the historical validity of Jesus’ crucifixion.

Now we are into the realm of the miraculous, not just historical events. And a miraculous event goes against our natural belief inclinations as informed by our day to day experience, or lack thereof when it comes to the miraculous. And this is not lost upon biblical writers such as Luke, Paul, and John. Paul tackles the issue head on by declaring in 1Corinthians 15:20, “But Christ has indeed been raised from the dead!” And John has this to say concerning Jesus in the opening of his first epistle:

Scripture states that in Christ “all the fullness of the deity lives in bodily form” (Colossians 2:9), and G.K. Chesterton described it in this way, “What was a circumference, became a point.” When it comes to man seeking God, he has been given exactly what is needed in the being of Jesus Christ. Man should not settle for wandering aimlessly around the layered circumference of thoughts, feelings, and religious actions, but indulge in Jesus- the only true, focused, and eternal source of faith, hope, and love that “makes the cake”. 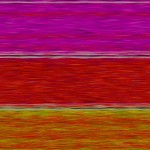